Drones and quadrocopters are also becoming increasingly popular and numerous in Switzerland. The increasingly affordable technology and the growing range of different models ensure that every Swiss can afford his own multicopter today. Anyone who has bought a drone and wants to get into the hobby of drone flying, e.g. to film the magnificent mountain world of Switzerland, is strongly advised to find out about the legal situation and the legal regulations beforehand: For example, insuring a drone is mandatory in Switzerland!


In recent years, Switzerland has reacted to the growing number of privately flown drones and has even passed a new law: The aim of this new legislation was to ensure the safety of all citizens. One point that was also of primary importance to Switzerland in the context of the redefinition of legal provisions: the safety of airspace. Due to drones flying ever higher and farther, there are repeated incidents and sightings of copters in the airspace that is actually closed to drones in the vicinity of airports or military restricted areas.

Let’s take a closer look at the legal regulations and requirements that private drone pilots in Switzerland should know in any case if they do not want to take any risks and want to fly their drone safely and legally.

As of 01.08.2014, Switzerland has amended its legal provisions in its DETEC Ordinance on Special Category Aircraft (VLK for short), thus clearly defining which drones are allowed to fly how, when and where. The reason for this tightening of the legal provisions was numerous incidents in which journalists and photographers let their drones fly over large gatherings of people in Zurich city centre.

A liability insurance of the drone is mandatory

Without a permit, owners of drones are no longer allowed to let a drone weighing more than 500 grams fly outside over crowds of people. It does not matter whether it is a highly frequented inner city area or an officially registered major event. Anyone wishing to have their multicopter flown for special missions in such settings must submit an application and meet special requirements (Article 17, paragraph 2 VLK). The conclusion of a liability insurance policy for the drone must also be proven (inexpensive and good provider here)!

Frequently asked: Is it allowed to fly over crowds of people with particularly small copters, such as standard quadrocopters like the DJI Phantom? Again, the legal regulation is clear and unambiguous: Flying over people is allowed, as long as the weight of the drone is less than 500 grams. Otherwise, a generous distance of at least 100 meters to the groups of people must be maintained.

In Switzerland, the following must always be flown on visual contact

Unlike in other European countries, drones in Switzerland may continue to fly over open terrain without a permit, provided they do not exceed the maximum permissible weight of 30 kilograms (Article 14 VLK). However, the pilots of the drones must be able to ensure that there is constant visual contact with the copter. If this is not the case, for example, because the pilot is using video glasses and flying in FPV mode, a second pilot must be present for backup, who can intervene in the flight manoeuvre at any time in an emergency. Provided that an intervention is possible at any time, autonomous flights by drones are also permitted in Switzerland in principle.

No separation between private and commercial use in Switzerland

While other countries make a meticulous distinction between commercial and private use of drones and quadrocopters, the rules and regulations on this subject in Switzerland are quite simple and straightforward: even for commercial flights of drones, pilots in Switzerland do not require any further authorisation for their flying object (Article 5 VLK). This regulation keeps the bureaucratic burden on owners of drones to a minimum.

Of course, Switzerland also has special regulations and flight bans at special locations. It is advisable to obtain detailed information about these, as any violation can have legal consequences for the pilot.

For example, the VLK stipulates that a generous distance from military airfields and civil airports must be maintained: a distance of at least 5 kilometres must be maintained at all times during flight manoeuvres with a drone or quadrocopter. Even beyond the 5-kilometer radius around airports, special caution still applies: As long as the so-called CTR, i.e. the control zone of an airport, flying with a drone or a quadrocopter is only permitted up to a maximum height of 150 meters above ground.

Aerial photographs are permitted as long as personal rights are protected

Most drone & model flight pilots also use their flying objects to take video or aerial photos. Switzerland gives its citizens a free hand with regard to aerial photography and video recordings. Other countries are much stricter. In Switzerland, aerial photography is also permitted without a permit. But: Of course, every pilot of a drone must respect the personal rights and copyrights of third parties within the scope of his recording activities.

Important for Switzerland: The above-mentioned regulations and legal provisions may be supplemented by further restrictions in the individual cantons and municipalities. In case of doubt, every pilot should inform himself about local and regional regulations before flying his drone, which must also be observed in addition to the generally applicable legal provisions.

In Switzerland, your drone must be insured against liability

In Switzerland, the insurance of the drone is considered mandatory. This is important for all pilots, no matter for what purpose and where they fly. In Switzerland, the obligation to insure drones was already clearly and unambiguously laid down in 1983 in the so-called Order on the „Operation of Model Aircraft over Public Ground“. There it says: „Anyone who […] uses aircraft must be sufficiently insured against possible liability claims and must be able to prove that they have this insurance cover“. This means that everyone must have their quadrocopter or drone insured in Switzerland.

Today’s current regulations go even further: anyone who lets a drone fly that exceeds the weight of 500 grams is obliged to carry confirmation of a completed drone insurance policy with them at all times during the flight. The guarantee or coverage amount of such insurance for drones must be at least CHF 1 million (Article 20, paragraph 1, VLK).

What is the easiest way to have my drone insured?

To have your drone insured and to take out a drone insurance policy is not a great effort for the pilots. There are already numerous professional providers, such as Mobiliar or AXA Winterthur, who offer their insurance products via the Internet: A particularly low-priced provider, who has variable insurance offers at favourable prices in his programme, which also meet all Swiss requirements and regulations, is versicherdrohne.de. Via this provider, you can take out affordable drone insurance for Switzerland quickly and easily in just a few minutes. The good thing about it: On the part of the insurer, great importance is attached to speed and customer satisfaction. This means that insurance cover for drones and quadrocopters is guaranteed and valid after just a few clicks: So flying with the drone can start immediately. 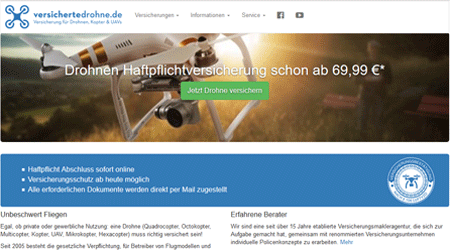 UAV insurance rates are affordable for everyone, starting from under 70 CHF for the lowest liability rate. Considering that the new models of the drone manufacturers DJI or Yuneec are still in the four-digit range in the purchase price, the amount to insure a drone is only a small amount per year.

The provider versichertedrohne.de is an insurer with whom many drone and model aircraft pilots from various countries have had outstandingly good experiences. Not only the service and the consultation are outstanding, but also in the case of damage can be set on fast competent assistance and an associated fast adjustment of a potential damage. And that is exactly what counts!

Of course, Swiss drone owners can also take out such an insurance policy on the officially German site versicherdrohne.de: Apart from very few exceptions, the insurance cover is international, i.e. even worldwide possible (exceptions are for example territories of the USA and Canada). The insurance cover is therefore also valid without restriction for the regions of Switzerland.

Many owners of drones ask themselves: What is the point of insuring their own drone? Anyone who briefly researches accidents and incidents involving drones can answer this question quickly and easily for themselves: Often just a gust of wind or the failure of a small technical component is enough to cause the drone to fly uncontrolled or, in the worst case, even crash. If an object is then in the vicinity, damage can quickly occur.

The situation can be even worse if one or more people are in the immediate vicinity: If these are hit by the drones or quadrocopters, which usually have a proud weight of between 2 and 5 kilograms, the injuries are often serious. There are even known cases in which people have retained consequential damage or have even become incapacitated for work.

If such a horror scenario occurs, the damage can usually no longer be settled with one’s own assets. Those who do not want to be in debt for the rest of their lives, for their own safety and for the safety of others, take out a cheap drones liability policy and are thus on the safe side at all times.

Even minor property damage can quickly lead to considerable amounts of loss: A broken windshield of a car or paint damage that requires repainting or even the replacement of a part of the bodywork are more expensive than one might think in the case of high-quality cars: 2000-5000 Euros are quickly collected. Here, too, every drone pilot who has insured his drone is covered – and for only a small amount per year, which should be worth everyone’s hobby.

By the way: If you want to insure yourself against the loss and damage of your own drone, you can choose from good already known drones & model flight insurers such as Mobiliar or AXA Winterthur with versicherdrohne.de, another inexpensive insurance option. Above all a drone comprehensive insurance makes sense, if one possesses a drone, which is expensive in the purchase price and high-quality technology with itself carries.

The regular legally required drone insurance is only a special form of liability insurance, i.e. only property damage and personal injuries are covered, which do not affect you. The comprehensive insurance, on the other hand, also replaces your own property damage reliably and quickly.

Would you like to insure your drone? Then visit versicherdrohne.de now… 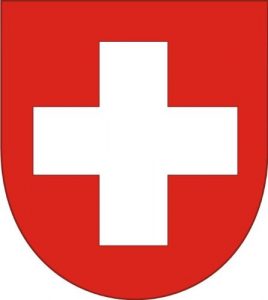